I can promise you that women working together – linked, informed and educated – can bring peace and prosperity to this forsaken planet. — Isabel Allende

Women are immensely powerful. We are multifaceted beings and able to jump from one idea, conversation, or task to another with relative ease, juggling home and work lives simultaneously.

Women, in particular, take on most of the mental load, finding time in the day to complete a herculean amount of tasks both at home and in the workplace. We may even find some spare time to start our own businesses! Creating and relying on a support network is often vital to ensure both our sanity and our success.

Compare this with the image of a founder (typically in tech, typically male), working 20 hours a day for months on end, possibly in a basement. Due to the relative level of success from this, Mark Zuckerberg for one comes to mind, we have decided as a society that this is a generally good way to be successful: a lone wolf staying up all night 100% focused on something. Women, however, may show their focus and dedication very differently. We tend to be more collaborative and keen to include others in our projects.

I love the idea of collaboration. To work together with someone to create something impactful and successful. Yet, with the majority of the Western world created by a patriarchal society, common masculine behaviours have been the historical benchmark for success measures in our careers. Women are broadly taught that we need to adopt male characteristics in order to be “undefeated”, and therefore successful. To compete instead of collaborate. To command instead of empathise. To focus solely on you, rather than helping each other up.

As the Co-founder of We The Change, Penelope Rose mentioned

So growing up in the Philippines when we learn about Philippine history, we hear about all the stories. We have women heroes. 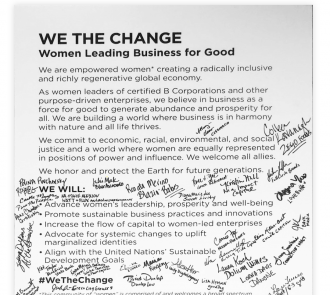 As a result, women in the workplace may avoid showing vulnerability or emotion from a fear that this could be interpreted as a sign of weakness. Taken to the extreme, an old and tired story from some authors is that we may become a Queen Bee (a controversial theory that claims a “woman in a position of authority in a male-dominated environment treats subordinates more critically if they are female”).

I have been fortunate to experience working in all-female and all-male workplaces, and it has been interesting to observe the deep value women can create by working together. Supporting each other and forging a path in a sometimes overwhelmingly masculine environment, context depending. In particular, I have observed how effective competent humans can be as leaders and how much progressive change we are able to bring from these positions of responsibility.

What expectations do we have of leaders? It turns out that we have gender differences in leadership effectiveness (what you need to do to perform well), with women scoring higher in leadership skills than men, even though only 4.9% of Fortune 500 CEOs and 2% of S&P 500 CEOs are women as of January 2020. On top of this, there is also a huge underrepresentation of BIPOC.

The difference between the number of men and women in senior positions is a hugely popular topic to research, with a multitude of articles and studies exploring the possible reasons for this inequality. Generally speaking, one explanation is that men are more confident applying for senior opportunities they are not qualified for, as they tend to have a higher self-rating compared to what others think of them. But, this does not mean that they make better leaders and may lack the necessary skills to perform the job effectively.

Take world events in 2020 as an example. Jacinda Ardern, New Zealand’s Prime Minister, led the way with the fight against COVID-19 and saved millions of lives by her effective implementations. The UK on the other hand, led by Boris Johnson, was criticised both by its own Members of Parliament and press around the world for how it handled the pandemic, with the German newspaper Die Zeit putting the UK near the bottom of the league table.

Like New Zealand, other countries with female leaders (Germany, Taiwan, Iceland, Finland, Norway, and Denmark, to name a few) follow similar patterns of success with COVID-19. Of course this is one of a multitude of factors that may have contributed to “flattening the curve” of the pandemic in each country, but it is an interesting observation. These women reached out to their countries with empathy and care, with Danish Prime Minister, Mette Frederiksen, even having a dedicated press conference to respond to questions from children across the country, hearing and acknowledging their fears. Using their position of responsibility to look after people with compassion really highlights the contrast with countries that fell back to blaming everyone except for those in power, leading by fear, and completely ignoring the science (UK, USA, Brazil, and Mexico, for example).

I love the community these women created. A sense of “I hear you, I know you are scared, and we will work together to get through this”. The importance of collaborating together (scientists, journalists, politicians, the general public) to listen to each other’s needs and respond empathetically. It gives me a feeling of hope to know that while we may make a little impact individually, together we can change the world.

With protestors for the #blacklivesmatter movement aiming for (long, long, overdue) justice, healing, and freedom for Black people around the world, to the general public in Bristol, UK, throwing a statue of a slave trader into the river, we can be so powerful when we work together. It impacts everyone, from collaborating to finish a project on time at work to organising your best friend’s surprise 30th birthday party. Interestingly, while both men and women benefit from having a well-connected network, women with a circle of close-knit female contacts have a higher chance of landing senior positions with greater responsibility and pay.

It is an age-old suggestion that women should align themselves with other women, no matter what. As Madeleine Albright, former U.S. Secretary of State, stated “there’s a special place in hell for women who don’t help each other.” Indeed, we expect women in senior positions to have the responsibility of championing less senior women, to take on the role of increasing that area of diversity for the business. And if she chooses not to, she may be stereotypically labelled a Queen Bee. Women are expected to be warm, friendly, and display typical feminine behaviours, and therefore are perceived more negatively when they are made leaders because of our expectations as a society of masculine norms being the measure for success. So even if we aren’t behaving any differently to men, we already face a double standard.

Depending on the context of the workplace, is it possible that the reason women may not support other women is because they are competing for the same limited number of opportunities? It has been suggested that this is a reaction to marginalisation. Perhaps, then, when an organisation is not inclusive and doesn’t provide equal opportunities for everyone to develop, the organisation is responsible for the competitive behaviour that comes from this, rather than the supposed Queen Bee. Particularly because there is no male equivalent to this phrase!

Instead of asking women to ‘lean in’, which is a typical male behaviour within itself and may not lead to competent leadership (not all women are great leaders, like not all men are either), we could take a step back and look at what it means to be an effective leader. To outline the behaviors that a successful leader has, and openly encourage them throughout a workplace, regardless of gender, race, and any other bias we can think of. Ensuring to be inclusive, recognise different needs, and focus on the talent rather than the specific characteristics. This may actually lead to an increase in the quality of leaders overall.
There is a need for companies to recognise that not all traits typically associated with leadership are effective, and that some behaviours that women in particular can bring, such as collaboration and empathy, can make a positive impact. There is a need for companies to listen to women, BIPOC, and marginalised communities to hear what is missing from their lives and provide them with opportunities and support. There is a need for us to recognise that people have multiple layers of identity, and that unconscious biases are not very helpful when engaging with each other, and can hold us back from our potential.
The world in 2020 is in a state of transformational and progressive change. Communities are coming together to support each other and care for the most vulnerable members of our society. The movement of Black Lives Matter has brought to the fore a sense of hope that we can change our society when we work together (a small but meaningful example being the ban of chokeholds by police in Minneapolis, USA).

The idea of humans appreciating and honouring each other’s different traits and encouraging an open and diverse culture is so powerful. Acknowledging our biases and consciously working to reframe these together can bring about revolutionary change: for women, for men, and for all individuals in humanity. I am excited to see the next generation of leaders shake up the status quo.

You can read more about defining collaboration through women’s impact on progressive change here.

About the Author: Daisy Simonis loves creating order from chaos. She believes in female empowerment and the power of reading books. Currently, on the hunt for the best coffee in London, she is the Head of Operations for an e-commerce start-up and a consultant for non-profits. You can find her on LinkedIn and is always open to book recommendations.